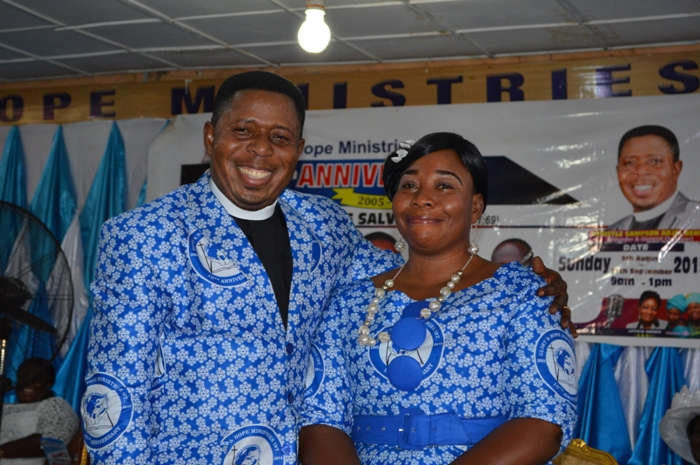 CONVERSION INTO CHRISTIANITY
Apostle Berko was converted to Christ in the year 1981 at the Church of Pentecost. He was baptized in June 1982 and was graced with the Holy Spirit Baptism in 1985.

WORK EXPERIENCE IN CHRISTIANITY
He started his church leadership role in 1990 at Ivory Coast where he was the leader of the church.

This did not long last as in 1991, he left for Ghana, settled and served with Bibiani Pentecost Prayer Centre.

During his stay at Bibiani Pentecost Prayer Centre, Apostle Berko started as a Prayer Centre Assistant. He later became the Assistant leader at the Centre under Prophet Ampofo and by dint of hard work Apostle Sampson Adjei Berko was confirmed as an Elder of the Church of Pentecost in April 1996.

Apostle Berko’s good work towards God’s work again was acknowledged as he was confirmed a Presiding Elder in four (4) Local Assemblies up to the year 2001.

During his eleven year period at the Bibiani Pentecost Prayer Centre as an Elder and Presiding Elder, Apostle Sampson Adjei Berko had additional responsibilities in the following areas:

To help spread God’s work, Apostle Berko left Bibiani for Kumasi in 2002. He had a two year stay with the Resurrection Faith Ministry where he served under Rev. Joshua Kas-Vorsah.

On 5th January, 2005 Apostle Sampson Adjei Berko founded the GLORY & HOPE MINISTRIES INTERNATIONAL (popularly called JORDAN PRAYER CENTRE) at Atwima-Kotwi in the Ashanti Region. Prior to this, Apostle Berko had undergone a one-year training in theology at the Calvary Bible College in Kumasi and obtained a Diploma in Christian Ministry in 2004.

ACHIEVEMENTS
Under the visionary and able leadership of Apostle Sampson Adjei Berko, the Glory & Hope Ministry International, which started with about 45 fellowship members under a tree can boast of a 2000 seater auditorium plus a sizeable undeveloped plot of land.

Currently, he is leading the church to put up a 4000 Ultra-Modern Seater Auditorium at the back of the present auditorium at Kotwi. It is over 70% near completion.

As a selfless leader, he has not kept the gift of God bestowed on him to himself (alone) but has imparted this gift of God to several Pastors and leaders in the vineyard from other churches. In addition to this, Apostle has not confined his Deliverance Ministry to the four walls of the church, rather he has extended it to many souls far and near through physical contact and via Electronic Media.

His inspirational  leadership, teachings, preaching and deliverance has won him a reputable recognition, respect and admirance worldwide. He has a large following with thousands of people flooding the church's headquarters as he ministers the unadulterated word of God.

CHURCH PLANTING AND EXTERNAL BRANCHES
As an international church, Apostle for his love for evangelism and commitment to winning the lost fir Christ in this end time  has led the mission of church planting through the opening of external branches worldwide. The church now has branches in Maryland (USA), Minnesota (USA), London (UK), Austria (Europe) and Belgium (France). To make the word of God spread so fast, the church has several pastors, elders, deacons and deaconesses and other several officers all working in diverse ways towards the direction of spreading God's word.